Fenugreek (Botanical name: Trigonella foenum-graecum) derives its name from the Latin wordfaenugraecum, which translates to “Greek Hay”. The use of Fenugreek can be dated back to the Bronze Age (around 4000 BC). In fact, Fenugreek seeds were found in the tombs of ancient Egyptian pharaohs including that of Tutankhamen.

It is widely grown in Asian and Mediterranean countries including India, Pakistan, France, Egypt, Turkey, Morocco, Afghanistan and others.

Fenugreek does boost testosterone levels and should be taken in dosages between 500-600mg per day to be safe but still useful. However, it will be most effectively taken together with other supplements such as Magnesium and Zinc. 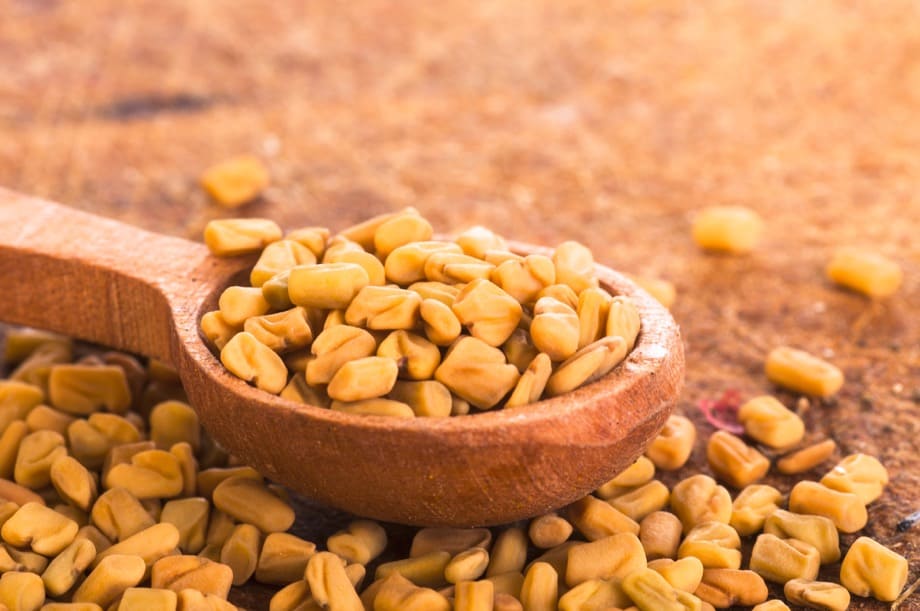 Fenugreek as a medicinal herb

Currently, it is generating a lot of interest for its potential testosterone increasing and libido stimulating qualities. Fenugreek is a widely used men’s health supplement, but the question is whether it really increases testosterone or it’s mere hype?

How does Fenugreek work on Testosterone?

It is believed that Fenugreek affects testosterone levels in two ways:

Fenugreek is also known to boost physical endurance and has muscle-building potential. It has properties that can help post workout recovery and fat burning.

What does research say?

You will find Fenugreek in most testosterone boosters available in the market. So, it would be of interest to see if there is any scientific evidence to substantiate its efficacy.

Several studies, both on animals and humans have been conducted to study the efficacy of fenugreek in increasing testosterone levels. However, it is important to note that most of these studies have been funded by private companies and were done on particular brands of fenugreek supplements. Let us take a look at what these studies found.

The first ever research tested in vitro the efficacy of Fenugreek seed extract in stimulating growth hormone release in rats. The research revealed that there were a few compounds present in the extract that were capable of stimulating release of the growth hormone. It was revealed that one of the compounds caused a 12.5 fold stimulation of release and the other 17.7 from the rats’ pituitary glands.

Effects of Fenugreek seeds extract on Endurance capacity in mice

This particular study found that when rats were fed 300 mg/kg Fenugreek seeds extract, they took longer to get exhausted. It also showed decreased fat accumulation and increased plasma non-esterified fatty acid. The study concluded that Fenugreek caused an improvement in swimming endurance by increasing utilization of fatty acids as a source of energy.

On the basis of these two animal studies, it can be concluded that:

Result: Fenugreek glycoside fraction led to a marginal increase in the testicular weight and did not alter or damage or change the histology ( tissues) of the testes.

Conclusion: Fenugreek extract does not cause any histological changes in testicular tissue.

While animal studies have shown promising results, whether or not the results can be extrapolated to humans remains a question. Thankfully, some human studies have also been conducted to establish the efficacy of Fenugreek as a testosterone booster. Here is what these studies found.

The effects of a commercially available botanical supplement on strength, body composition, power output, and hormonal profiles in resistance-trained males

The study was conducted on forty five resistance trained men. They were administered either 500mg of Fenugreek or placebo. The study revealed the following facts:

30 trained athletes enrolled for the research and consumed 500mg fenugreek extract per day for eight weeks. During the study, the athletes were muscle training every four days. At the end of the 8 week study, body composition was measured by hydrodensitometry and muscle strength by isotonic bench and leg press. Reduction in body fat was also recorded.

This is the most recent study conducted on the subject. It was carried out in Centre for Integrative Clinical and Molecular Medicine. For the purpose of study, 60 men in the age group of 25-52 were administered fenugreek extract twice daily for six weeks. The results were:

Fenugreek acts by inhibiting enzymes that break down testosterone

Study: Fenugreek is considered to possess aromatase and reductase inhibitor activities, the enzymes responsible for the breakdown of testosterone in the body. Authors took up this clinical investigation in three groups of healthy trained men for two, four and eight weeks. All the subjects orally consumed 500mg of fenugreek extract per day. At the end of study testosterone levels were estimated and body fat, muscle gain and strength was evaluated.

Result: Authors observed an increase in testosterone levels. A reduction in body fat was observed that is directly linked to improved androgenic activity.

Is Fenugreek really a testosterone booster?

Despite all the research, we still don’t have concrete evidence in support of Fenugreek’s efficacy as Testosterone booster. However, it does help in reducing fat, increasing upper and lower body strength, improving lean muscle mass and enhancing libido. So, its presence in men’s health supplements is fairly justified. The fact that Fenugreek is regularly consumed by millions of people across the Asian continent shows that it is completely harmless.  The side effects are rare and often a result of overuse or misuse.

The physiological effects of consuming fenugreek extract concerning the reproductive system include an increase in the levels of testosterone, luteinizing hormone, prolactin and testicular size in rats.

Fenugreek extract improves general immunity, vitality, libido, muscle strength and lean muscle mass. This extract can be safely used for increasing blood testosterone levels and can also be used along with other supplements as there are no reported cross-reactions.

The only known mechanism of action of fenugreek extract is via inhibiting the aromatase and reductase enzymes that bio converts testosterone to dihydrotestosterone. Hence, physiologically fenugreek acts by arresting the bioconversion of testosterone and it helps to maintain the healthy levels required for vital androgenic functions.

There are a few reports describing the active ingredients of the extract that are possibly responsible for the physiological effects of fenugreek. However, there is to date, no report with purified fractions that produce the same impact as the extract. The most plausible explanation to this is that fenugreek extract like all other natural plant extracts acts synergistically and all the components are essential for bioactivity.

There are few reports on the antidiabetic properties of Fenugreek seed extract implicating its positive role in managing autoimmune disorders. Stacking fenugreek supplements with other mineral and vitamin supplements not only improves testosterone levels and muscle strength it also enhances general wellness.