Stinging nettle (scientific name: Urtica dioica) is a medicinal plant with a wide range of health benefits. The plant is named “stinging nettle” because its stems and leaves have hairy structures called trichomes, which cause a stinging sensation on touching.

Stinging nettle is about 80 percent water and 5 percent protein. It contains numerous fatty acids and a variety of amino acids including glutamine, beta-alanine, leucine, phenylalanine and histidine.

It is also rich in bioactive nutrients such as polysaccharide lignans, glycosides and sterols. These nutrients affect the human body in several ways and help boost health.

Stinging Nettle is not essential for boosting testosterone levels although can undoubtedly be helpful combined with other ingredients. I would not bother taking this as a stand-alone supplement if my only goal was to increase my testosterone levels. 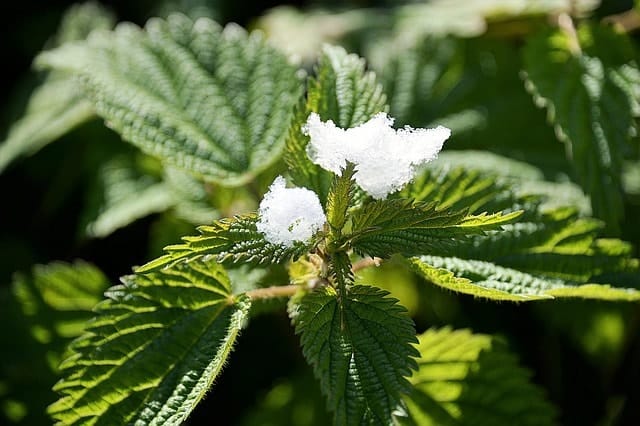 Stinging nettle has been used to treat a wide variety of health problems ranging from cardiovascular diseases to cancer. It has been extensively used in traditional folk medicine to treat conditions such as:
• Dysentery
• Muscle wastage
• Chronic skin eruptions
• Intestinal Worms
• Hair loss
• Prostate swelling

Stinging nettle is also found in many testosterone boosting supplements. Here, we will find out if it is effective in boosting testosterone and what scientific research says.

How does stinging nettle boost testosterone?

What do the studies say?

Several animal and human trials have been conducted to understand how stinging nettle supplementation may impact testosterone levels. Here is a look at what some of these studies have revealed.

The groups receiving stinging nettle had significantly higher testosterone levels compared to those receiving only testosterone treatment. The affect was attributed to inhibition of the enzyme 5a-reductase in the nettle groups (full study).

Each of the compounds isolated from stinging nettle root was effective in aromatase inhibition (11-24 percent).

Study: Lignans from the roots of Urtica dioica and their metabolites bind to human sex hormone binding globulin (SHBG)

The study investigated the potential interaction of plants compounds known as lignans with human sex hormone binding globulin (SHBG), a protein that transports and stores testosterone and other sex hormones. This interaction is important to study because once SHBG is bound to testosterone, it cannot be used by the body.

The research involved isolating multiple lignans from stinging nettle root extract and testing them separately in a solution containing dihydrotestosterone and SHBG, one of the sex hormones.

At the end of 18 months of medication, researchers found:

Study: A clinical study was conducted on 100 Benign Prostatic Hyperplasia (prostate enlargement) patients aged between 40-80 years. Main exclusion criterion for the study was acute renal problems like severe infections and failure. Patients were given 300mg nettle extract two times a day for 8 weeks. The effect of extract was evaluated by observing reduction of clinical symptoms in the patients after two months.

Result: As compared to the placebo group authors found that symptoms of an enlarged prostate were relieved in the patients administered 600mg nettle extract per day. The patients were quizzed for various symptomatic effects like emptying the bladder and need to push to urinate. The subjects under treatment did not report any other side effects.

Study: Clinical research on the effect of 120mg nettle extract taken three times a day for six months on 620 patients was taken up. After six months, an ultrasound was conducted to measure the prostate size, and serum testosterone levels were estimated. All the patients including the placebo group were included in the trial and were administered 120mg nettle extract three times a day for the next 18 months. At the end of the study, the impact of nettle extract was evaluated by measuring the prostate size and quantifying the levels of hormone-like testosterone and prostate-specific antigen in blood.

Result: At the end of the study 81% of patients reported relief in lower urinary tract symptoms but no other side effects. The ultrasounds revealed limited reduction prostate size and blood analysis indicated no change in testosterone levels.

Study: Nahata and Dixit reported an in-vitro method for screening various herbal extracts for 5 alpha-reductase activity. This is an essential enzyme that breaks testosterone to dihydrotestosterone, inhibition of this enzyme maintains high levels of testosterone in the blood. Some plant extracts including Nettle extract were used for in vitro biochemical reaction.

Conclusion: Nettle extract enhances the testosterone levels by arresting its bioconversion to dihydrotestosterone.

Study: Ethanolic and petroleum ether extract of nettle root and one purified component of the extract (β-sitosterol) were administered to rats ( with induced prostate enlargement) at concentrations of 10, 20 and 50 mg per Kg body weight for 28 days. The only exception in this experiment was the concentrations of purified component used were 10 and 20 mg per kg of body weight. At the end of the study, serum testosterone levels, prostate-specific antigen, and ratios of body and prostate weight were determined.

Study: Multiple independent in vitro studies were conducted in the 1990s to elucidate the mechanism of action of nettle extract. Prostate membranes were used in vitro in binding assays using various extracts of stinging nettle.

There are no recommendations for correct dosage of stinging nettle for increasing testosterone. However, most supplements recommend 250-750 mg.

Potential side effects of stinging nettle

Stinging nettle may cause some minor side effects such as sweating and an upset stomach. It is largely considered safe and well-tolerated, with very low toxicity.

Human clinical studies show no adverse toxic side effects of nettle extract. Prostate hyperplasia can be reduced by oral ingestion of 120mg extract thrice a day for six months. Purified fractions of the extract have also been used in a few studies and show positive influence in the management of prostate enlargement.

However, there are no studies on the use of this extract along with common drugs and its interaction with drugs is not known. A daily dose ranging from 500-600 mg did not show any side effects, and any higher dosages beyond these levels must be taken only after getting a physician’s advice.

We don’t have enough conclusive evidence in support of stinging nettle’s efficacy as a testosterone booster. Most of the studies conducted on humans are in vitro, i.e., they have been performed on isolated cultures and not on humans themselves.

The only study that has been conducted on humans has failed to show any positive results. So, we cannot really call it a strong testosterone booster unless more scientific research is conducted.